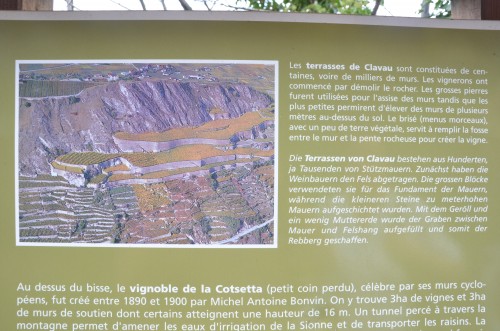 When the crowd gathers on highways Helvetic jamming in the valley of Wallis, try an alternative route on the heights (“itinéraire bis” in french). Clavau is a good one because it winds between the walls, along the “Bisse du Clavau” in the heart of the vineyards Gilliard, Bonvin and Varone. 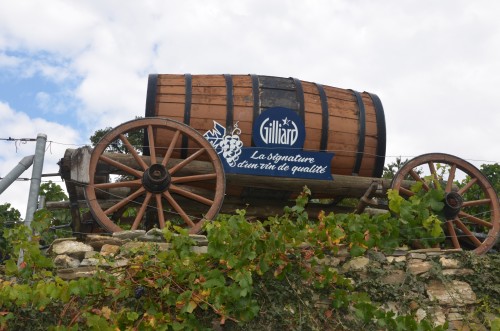 It should be noted that the Clavoz and Clavau are two possible spellings of this microchannel named “bisse” and created, among others in the fifteenth century, by a cunning Bisson (like “Bison fûté”, an indicator of road traffic in France), to irrigate the plains from the mountains of Wallis. There are sometimes dizzying in steep wall and not for the fearful Dutch woman, used to rope up to cross the towpaths of Amsterdam. Historically, the vineyard was originally colonized the hillsides to make way for vegetable crops in the valley. The land has been shaped, as the slope was steep and dry stone walls, sometimes monumental, were created to allow the soil to resist erosion. Here they sometimes reach 16 meters high and it is the highest in the world. Surprisingly, it took no less than three hectares of walls to allow the operation of only 3 hectares of vines ..! Awesome! "God made the slope, but we have made it useful” has very wisely pointed out CF Ramuz, before rushing straight into the wall, a couple of centuries ago. Titanesque work undertaken at the end of the nineteenth century are now walking itinerary for the wine tourists or journalists and œno-bloggers on a spree.

Along the “Bisse” there are a lot of huts named “guérites”, initially dedicated to storage of winemaker’s tools and now transformed in supplies stands. La Guérite Brûlefer, suspended above the Bisse, offers the weary and thirsty walker an oasis in the heart of the vines. Brief menu with regional specialities and good wines, from Domaine Bonvin, to get back in shape for the road in the middle of the ride. Christophe Bonvin, ex Swiss international footballer, author of two goals and one decisive pass at Anfield Road with the FC Sion (many years ago, but it seems it was yesterday when he told us), now executive assistant to Charles Bonvin’s Vineyards (more premeditated winegrower’s name is not possible), knows how communicate and always shot full frame.

Along with Rose-Marie and Marie-Rose, a real pair of twins with interchangeable glasses, Christophe Bonvin sees far and knows how to entertain visitors. 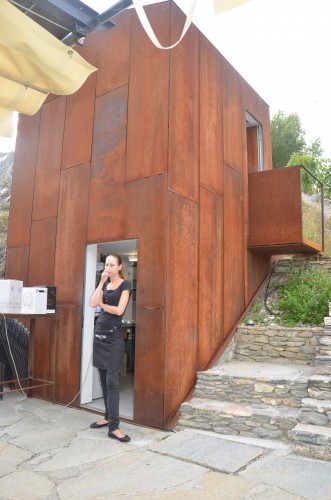 When you take the road along the Bisse, towards St. Leonard, you arrive in a space neurosensory outdoors in the middle of the estate vineyards Varone. After a short climb from the ranks, where everyone is encouraged to see, feel, touch, taste, you arrive finally at the Cube, guarded by a pretty and friendly Cerberus, true oxymoron, which encourages to drink and finally eat something. The Cube is a designated and redesigned hut, in which no more tools are stored but serves as a pantry ... 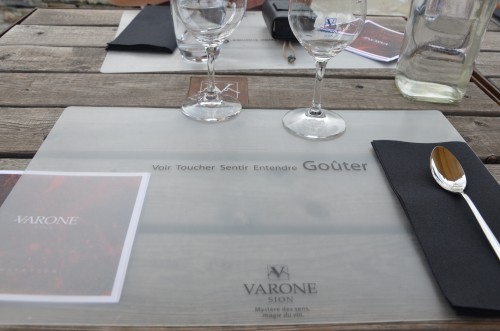 ... space-tasting food and wine, opened in summer on weekends only, weather permitting. No other choice because the tables are laid out. For this reason, it's best to book in advance and ask about meteorology. Wine tourism initiative as we'd like to see more often, culminating in that day with an espuma of cheese, gelly of chasselas wine, the kind of food that would be turning in his grave any Wallis man, but deserves just for repeating the course along Bisse de Clavau.